Market confused amidst a reddish hue |

Bitcoin And Ethereum Down By 11% – Commentary By Experts |

Ripple CEO Reports the Platform is Legal and Endorsed in Thailand |

Bitcoin [BTC], Ethereum [ETH] and XRP are vying for a spot in…

More Than 1,600 Attorneys Nationwide Call For Russia Investigation To Be Protected…

Holy mackerel! Out of the blue, Bitcoin dropped to a new 12-month low with little notice. Anyone hoping for a Santa Claus rally had better drop to their knees and start the Hail Marys.

Today Bitcoin (BTC) 00 got nuked. In fact, the entire cryptocurrency market took a direct hit from a 50 megaton hydrogen bomb — and it looks like it’ll take a while for the smoke to clear. Novogratz was wrong, Tom Lee was wrong, everyone who thought $6,000 was the bottom was wrong. Analysts will probably spend the rest of the week attempting to determine the sources responsible for the turmoil.

Currently, the most digestible explanations suggest that the current sell-off was kicked off by a combination of $6,000 representing a stop loss trigger, as well as the current Bitcoin Cash hard fork exerting pressure on an already fragile Bitcoin price.

The weekly chart broke bearish after a lengthy series of sideways trading and any oversold bounce under $6,540 is just a lower high, meaning a nearly 15% bounce is needed to restore BTC 00 back to where it was yesterday. Fairly unlikely given the last 4 – 6 months of trading but as mentioned yesterday, with the upcoming Bitcoin Cash hard fork ANYTHING could happen.

The MACD made a bearish cross and the RSI has also broken from its persistent flatline and now dips toward oversold territory. A number of investors and analysts are attributing the current volatility to the BCH fork but it should be noted that Bitcoin frequently dipped below $6,200 and $6,100 and BTC’s inability to overcome overhead resistances highlighted an underlying weakness so while surprising, today’s dip below $6,000 seemed inevitable.

$4,500 and $3,000 are the next supports to watch and the market and its multitude of analysts will decide which prices in between this range will function as psychological supports and resistances. 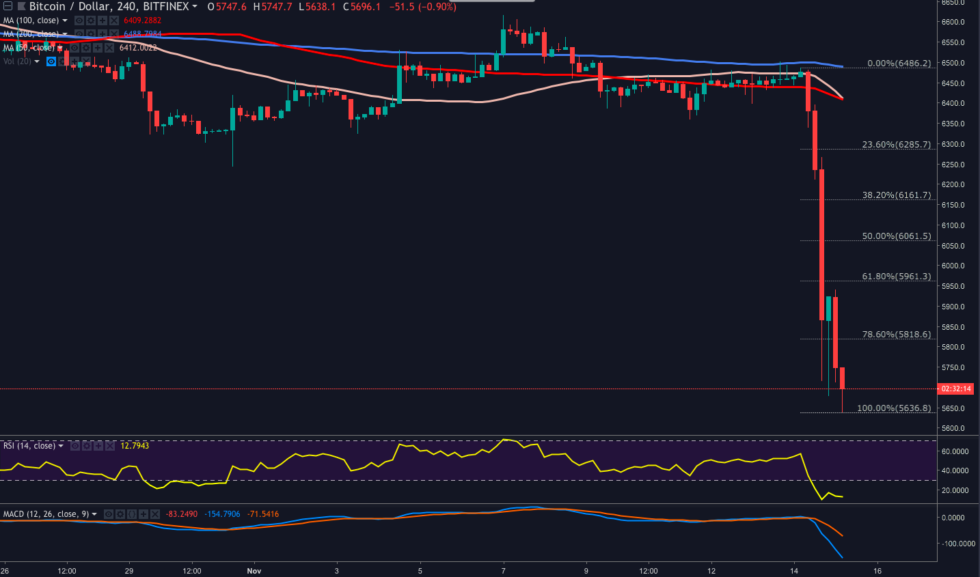 There’s not too much to say here that hasn’t already been said. The lack of resistances below the $6,200 – $6,100 zone allowed BTC to drop like a blade through butter and BTC price is now lower than it was on November 12 of 2017.

Traders might think twice about playing oversold bounces as bears are clearly in control and the current downtrend is still young. The RSI, Stoch, and MACD could easily become extremely oversold and given that a family feud over BCH might be fuelling the entire market downturn, analysis of charts may provide limited value for time being.

The wisest thing to do might be to watch from the sidelines and enjoy the free BCH-SV coins that will be earned by BCH holders. Alternatively, savvier traders might take note of the spread between USD and stablecoin (USDT, Paxos, TrueUSD) or the $300 Bitcoin 00 premium that exists between Bitfinex and Coinbase.

[Disclaimer: The views expressed in this article are not intended as investment advice. Market data is provided by Bitfinex. The charts for analysis are provided by TradingView.]

Why do you think Bitcoin dropped 15%? Share your thoughts below!

Who Is Satoshi Nakamoto? (Infographic)

Volumes Dry Up as Monthly Losses Rise to 23 Percent